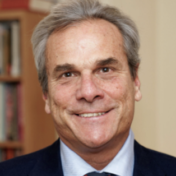 James Breiding is author of "Swiss Made: The Untold Story Behind Switzerland's Success" and founder and CEO of S8nations.

The Club Baur au Lac was Egon Zehnder’s watering hole. Fashioned after the famous English clubs in St James, it oozes with an exclusive clientele of Zurich’s establishment.

Most days, he would walk in with his usual confident swagger and welcoming smile. Appearances were important to him: a hand-tailored Savile Row suit, a sleek Hermes tie with ducks discreetly cast against a pastel color, freshly polished shoes, and Cary Grant looks.

A warm greeting from the bartender. A CEO of a major hotel chain, recently out of a job, discards his newspaper and jockeys his way to say hello. The chair of a Swiss multinational pats him on the shoulder, a few words exchanged, and an audible mutual laugh erupts. Zehnder liked people and people liked him. In these circles, he knew them all.

Egon Zehnder, the eponymous headhunting firm, has emerged as one of the great business success stories of our time. It has changed how we think about recruiting talent in every corner of the world.

No other search firm is as broadly positioned internationally: 63 offices in 37 countries, 2300 employees, 259 partners (39% are women). While Zehnder has shaped countless careers and become a household word in c suites and Boardrooms around the globe, almost nothing is known about the founder or the firm.

Zehnder’s beginnings were modest. He grew up in Zurich, the son of an historian and middle school teacher. He studied law at the University of Zurich but the prospect of poring over federal court judgments and bitter legal disputes did not appeal.

His „road to Damascus“ moment came when he decided to obtain an MBA from Harvard Business School. America Inc in 1956 was the pinnacle of power and popularity and Egon was enamored with it all.

He discarded his carefully pressed Swiss military Captain’s uniform and ingratiated himself with the east coast Harvard elite including Penny-loafers, oxford shirts from Brooks Brothers, and Jimmy Stewart mannerisms.

He got a job with McCann Erickson, the giant advertising agency, mainly with the aim of repaying his student loans. A few years later he moved to Chicago to join Spencer Stuart, noticing something seismic was afoot.

An MBA stands for a „Master’s in Business Administration“, so graduates were expected to administer companies owned by the wealthy. The advance of pension and mutual funds redirected power from owners to managers and the notion of shopping around to optimize both career and wealth as an employee, a novelty, was taking hold.

Company boards were also under growing pressure to boost their share prices and finding talented management was considered the surest means. Suddenly, talent was fungible, and brokers were needed to facilitate its exchange.

Executive search—headhunting, in the vernacular—was a fast growing and lucrative sector, but had a reputation for „golf-course, back-slapping sales guys“, as one veteran admits. The young Egon, at 34 years old, was fired up with ideas fresh from HBS’s Aldrich Hall.

Zehnder moved back to Zurich where he started Spencer Stuart’s European operations but disagreed with the firm’s policy of charging „contingency fees“. Through a legal quirk requiring rental contracts to be held in the name of a Swiss citizen, Zehnder ousted his former employer, started his own business in 1964 and took over stately offices at Bahnhofstrasse 1, the best address in the city.

The Swiss establishment was not impressed. „Du muesch öpis schaffe“ (what matters is to make something). The Swiss elite at the time were engineers from the ETH who didn’t believe in advertising; the quality of the product spoke for itself. The idea of poaching talent was taboo and unbecoming.

Having expensive, well-appointed offices without any clients is not a recipe for success. Zehnder turned his focus to Germany where his Harvard roommate, Al McDonald, was building up McKinsey’s business.

McDonald provided valuable introductions to German industrialists and Zehnder made a name for himself as a gifted and reliable discoverer of talent. New offices were rolled out methodically as profits grew: Paris (1968), Copenhagen (1969), Milan (1971), Sao Paulo (1975), New York (1977) and Delhi (1996).

While foes such as Korn Ferry, and Heidrick + Struggles fought it out in New York and London, Zehnder built dominant positions in burgeoning markets such as Brazil, Germany, India, Singapore, and Turkey.

At some point during one of our lunches, I asked him „How is business going in India?“, and he discreetly pulled out from his breast pocket a handy A4 sheet with KPI’s of the performance of various offices and commented like a fanatic fan of Liverpool or the Boston Red Sox.

For all his charm, and enthusiasm, he also had a watchmaker’s attention to performance.

More offices meant Zehnder could fish in more ponds for talent. With more consultants came more mandates, and talent pools swelled. Just as Tesla uses data from its drivers, Zehnder accumulated data on its candidates. „It was important to be on Zehnder’s short list“ explained a former head of communications at ABB.

At the company level, Zehnder designed an iron clad culture, remarkably antithetical to most of the clients it served. While many companies cultivate  super-stars and utilize an „eat what you kill“ remuneration system, the ethos at Zehnder is egalitarian and compensation is team based.

Unlike the precise job specifications agreed with clients, partners are often found from obscure backgrounds, and groomed for the long haul. Damien O’Brien, its former Chair, was a preacher in Sydney.

While the typical CEO lasts 3-5 years, the turnover rate of partners is only 2% p.a. Some have likened them to a Jesuit order. Others have joked that if companies were managed similarly, Zehnder would not have any clients.

At the individual level, Zehnder was also counter intuitive. In Latin sentire means to feel and he had an uncanny ability to read people. Neuroscientists say we have thirty-three dedicated receptors regulating our various sensory systems.

Zehnder seemed to have more. His ability to sense the world around us and how we fit in was extraordinary, bordering on clairvoyant. „He would look you straight in the eye and read your soul“ described George Mueller, from an established Swiss industrial family.

Notwithstanding his American optimism and „can do“ spirit, his values were conservatively grounded in the classic „Homo Helveticus“ mold with mutual respect to family, career, community, and military.

His inner circle, for those who knew them, were Hans Baer, Haro Bodmer, Ulrich Bremi and Fritz Gerber; all cut from a similar cloth. But his five children and sixteen grandchildren, most living within a few meters of him in Küsnacht, mattered more than anything to him.

Success inevitably invites criticism. The truth is that it’s not possible to measure Egon Zehnder’s success or failure. Unlike a Tesla it is not possible to test drive it or benchmark its acceleration against a Ferrari.

Failed hires can be extremely costly and consultants are rarely held accountable for their bad advice. Zehnder was disturbed by the phenomenon of run-away executive pay and feared it attracted greed rather than talent. He was especially irritated by the disturbing practice of rewarding failure with „golden parachutes“ and such.

Far from greedy, Zehnder was „exceedingly generous with his time, spirit and wealth“ commented Rajeev Vasudeva, who built up Zehnder’s highly successful business in India, including its „Knowledge Center“; a 500-person team conducting low-cost industry and candidate research.

A stunning act of his generosity revealed itself when Zehnder left the firm twenty years ago and gifted the remaining partners his majority share in the firm, worth by today’s standards several billion dollars.

The founders of most great firms, dependent on their talent, tend to sell out such as Goldman Sachs and Carlyle. But Egon built Zehnder to last and felt its tightly woven culture might unravel if interests were no longer aligned.

Anonymous, transient shareholders, keen to optimize the short-term value of their shares can be a toxic replacement for diligent, hard-working partners with „skin in the game“.

As we walked out of Club Baur au Lac, guests went out of their way to say goodbye. I couldn’t help but notice how Zehnder managed to make people feel as though they were the center of his universe.

As we were grabbing our coats, I prompted him to consider writing a biography. „Our reputation is such that the less we communicate, the better“; he said.

I then realized why so few knew anything about him.

Egon Zehnder died recently after a short illness at the age of 91. He leaves a firm of considerable and enduring value that bears his name. He will be missed by his five children, sixteen grandchildren and those of us who were fortunate enough to know him.

James Breiding is author of "Swiss Made: The Untold Story Behind Switzerland's Success" and founder and CEO of S8nations.